Many species of fungi naturally produce light, a phenomenon known as bioluminescence, however, the fungal substrates used in the chemical reactions that produce light have not been reported. We identified the fungal compound luciferin 3-hydroxyhispidin, which is biosynthesized by oxidation of the precursor hispidin, a known fungal and plant secondary metabolite. The fungal luciferin does not share structural similarity with the other eight known luciferins. Furthermore, it was shown that 3-hydroxyhispidin leads to bioluminescence in extracts from four diverse genera of luminous fungi, thus suggesting a common biochemical mechanism for fungal bioluminescence. 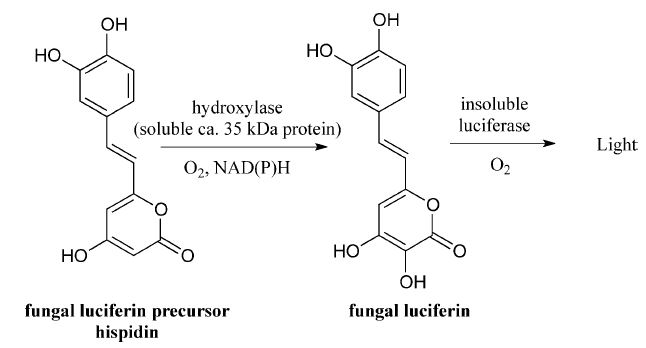 There is no sadder sight in the world than to see a beautiful theory killed by a brutal fact. [T. Huxley]
The pursuit of knowledge is hopeless and eternal. Hooray! [Prof. H. J. Farnsworth]
Trust the rhythm and the rhyme of your own heartbeat. [C. Douglas]
Nach oben
Antworten
1 Beitrag • Seite 1 von 1